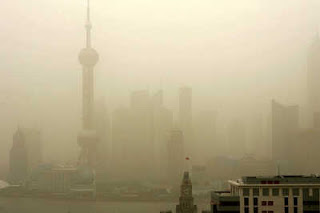 On the popular website for Chinese living abroad, mitbbs, people often post their experiences visiting China. A recent post described a mother's worry for her daughter's health in Shanghai because the pollution is so bad. The responds this post got were overwhelmingly negative. Many people said the original poster was too picky and pretentious. Sure, very few people on that forum was born and raised in the US. Instead, they are immigrants, often moved out of the country in their adulthood. It is hard to argue that after a few years living elsewhere, a person would grow so unaccustomed to his/her birth place.

But we all know, we all change. Isn't that the main purpose of leaving in the first place? We want to change, and give up what we had for the hope of change. Besides, why do some people like to bury their heads in the sand? I guess it's too hard to judge something when you have too much attachment or affection towards it.
Posted by Tao-青帝 at 10:47 AM 1 comment:

Tao-青帝
Chicago, United States
I moved from mainland China to the US to pursue a PhD in design several years ago. Now working as an assistant professor in Chicago. Got my Green Card since Feb 2012. Maintaining a Chinese blog and writing for several newspaper/magazines in China.